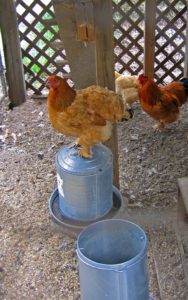 A secure environment is needed at night

In The Garden – By Stephen and Kristin Pategas

Too often, homeowners call to say they need our help because their last garden re-do did not turn out well. Among other things, they say the design was not sympathetic to the house style, patios or walkways weren’t in the right places, drainage issues were left unresolved and/or plants didn’t thrive. Usually a professional did not do the design, and the installer “designed” them with their profit margin in mind and without the homeowner’s needs in mind. This parable about the design and installation of a different type of project reveals the importance of having the proper design professional on board.

Homeowner Earl E. Riser’s local government finally passed an ordinance allowing backyard chickens. Earl could already taste those fresh eggs scrambled with a rasher of bacon. However, the hens needed a home and Earl was a big fan of one-stop shopping. Freddy Fox claimed he was a Cracker Jack designer and a thorough contractor who could handle the whole henhouse project. In fact, the design would be free and he could do all of it for less money and with less hassle.

Freddie seemed really confident and even had pictures of henhouses with a few that rivalled a mini-Taj Mahal. This was eggxactly what Earl thought he was looking for. He signed on the dotted line, wrote a check and sat back with visions of Mediterranean and Mexican omelets dancing in his head. 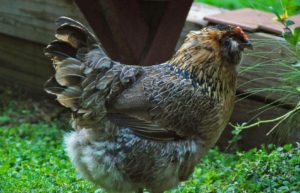 Foraging adds to a healthy diet for a chicken

Finally it was time to see Freddy’s plan. The napkin it was sketched on was not impressive but the sight of a bit of Hollandaise sauce dribbled on one corner made Earl drift off into a reverie about the eggs Benedict he had while on vacation. The poached eggs were just right –dippy eggs where the yolks runneth over. But, his eggs would be even fresher and dippier.

Construction seemed to go smoothly, but it was hard to tell if the rising structure really was the same as what was shown on the napkin. Hmmm, was that “plan” to scale? However, the coop did look quite impressive. When the city inspector stopped by, she discovered one wall too close to a property line. Freddy’s upcharge to move it a few feet was unexpected and work slowly progressed.

Finally it was time for the hens to come home to roost – so to speak. Earl bought a new frying pan for his egg creations and it didn’t take long for the hens to settle in and scratch around snatching bugs in the backyard. Knowingly, Earl smiled since he knew the bugs and the compost the hens ate would add flavor to the eggs. Soon, the clucking signaled laying activity and that evening Earl pulled out his whisk, bowl, and brand spankin’ new pan. The refrigerator was stocked with bacon, mushrooms, green pepper, and cheese. 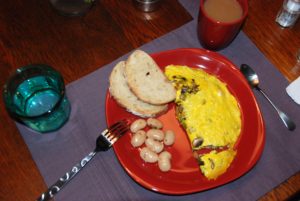 Fresh rich eggs add a deeper color in an omelet

That night, Earl slept fitfully as his dog in the neighboring room paced and barked. Towards morning, dreams of dancing eggs had Earl up bright and early. With a basket in hand, he sprinted out to the henhouse only to find no eggs – or hens. However, there were plenty of feathers along with a hole in what now appeared to be a way-too-flimsy fence. Hmmm, did that napkin include any fence specifications? And, oh my, what was Freddie Fox’s business card doing there stuck in the fence along with a bit of his fur?

In retrospect, Earl realized he should have hired a design professional. Then a proper set of plans would have been placed out to bid for competitive pricing from licensed contractors. This most likely would have protected his wallet and his hens. Unfortunately, the process Earl followed was not what he thought it would be cracked up to be.