A Monumental Bierstadt Landscape At The Morse

The Domes of the Yosemite, the largest existing painting by Albert Bierstadt (1830–1902), will be exhibited at the Morse this winter and spring through a special loan from the St. Johnsbury Athenaeum in Vermont.

The monumental painting, having just received conservation treatment in Miami, is now on view at the Morse through July 8 before returning to Vermont. The 1867 oil-on-canvas, almost 10 feet by 15 feet, has not been shown outside the Athenaeum since its first installation there in 1873.

“The Domes of the Yosemite, said Laurence J. Ruggiero, director of the Morse Museum, “is a virtuoso performance by one of the most beloved painters of America’s natural beauty—sweeping, sumptuous, dramatic and luminous.”

He continued, “It is a privilege to be able to make this landmark American painting available to them.”

Charles Hosmer Morse, the industrialist and philanthropist for whom the Morse is named, is a native of St. Johnsbury. The Elizabeth Morse Genius Foundation—which has provided significant grants to Morse’s school, the St. Johnsbury Academy—gave $100,000 toward the Athenaeum’s Domes Project, which includes the painting’s conservation as well as the installation of an HVAC system in the Athenaeum, structural repair to a gallery viewing balcony, and the conservation of frames in the collection. 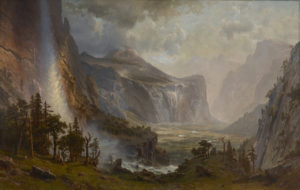 “With age, the canvas had become weak where it wrapped around the stretcher, so much so that there was significant distortion in the upper left corner,” said Bob Joly, director of the Athenaeum. “Also, the surface was coated with a synthetic varnish in the 1950s, which becomes harder to remove the longer it remains. When it returns, The Domes will be appreciated for its beauty and its great condition.”

Treatment of the work at ArtCare Conservation Studio in Miami, where it arrived in mid- October, has included repairing the tears around the perimeter, flattening the distortions, and removing surface grime and varnish.

Bierstadt, a German-American artist, was lauded for grandiose landscape paintings, particularly those that captured the newly accessible American West. His work represented the maturation of the great American landscape tradition, and his painting  Valley of the Yosemite has been called his crowning achievement.

The Morse Museum is known today as the home of the world’s most comprehensive collection of works by American designer and artist Louis Comfort Tiffany (1848–1933), including the chapel interior he designed for the 1893 World’s Columbian Exposition in Chicago and art and architectural objects from Tiffany’s celebrated Long Island home, Laurelton Hall. The museum’s holdings also include American art pottery, late 19th- and early 20th-century American painting, graphics, and decorative art.

The museum is owned and operated by the Charles Hosmer Morse Foundation and receives additional support from the Elizabeth Morse Genius Foundation. It receives no public funds.

For more information about the Morse, please visit www.morsemuseum.org.