A Night Of Mourning 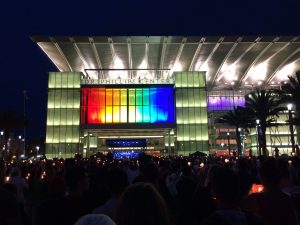 On Saturday, June 11, 2016 I was celebrating a friend’s birthday with others at a nearby pizza restaurant – a rock’s throw from Pulse Nightclub. It’s your friendly neighborhood gay bar sandwiched between a car detail shop, a Dunkin Donuts, and across from Einstein Bagels – you know, just another place on busy South Orange Avenue.

But later that night, it became the center of the universe.

I woke up Sunday morning, turned on the TV and watched the news break of a shooter who had killed at least 20 people inside the club. As the morning wore on, that number quickly climbed to 49. My God. 49.

I was born at Orange Memorial Hospital, now known as ORMC – now the Level One Trauma center for the worst mass shooting in modern times in the United States. 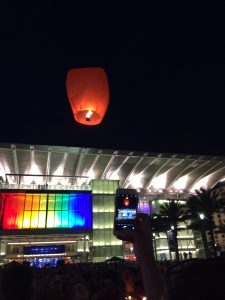 Within hours, every news outlet descended on Orange Avenue and began broadcasting 24/7 about what just happened. We’re not used to this. To hear my town’s name being said over and over again followed by the words “mass shooting” was breaking my heart. Why here? Why anywhere? The tributes from around the world made me cry, but hopeful. Sad, but focused. Enough is enough.

I decided to go downtown with some friends to take part in the first vigil held on the lawn of the Dr. Phillips Performing Arts Center on Monday, June 13. A crowd of nearly 8,000 people gathered to heal, listen to community leaders, ring bells and hear music, light candles and cry together.

Since this heinous crime happened, I have seen my hometown show the world how generous and caring, giving and nurturing, loving and inclusive we are as a community. The vigils, the blood donors, the fundraising and donations have poured in at lightning speed, and still growing.

A few days later, another vigil was held. This time an estimated crowd of 50,000 people gathered around Lake Eola. Since then, dozens of vigils, memorials, and events have taken place all over Central Florida, with more planned weeks ahead. Cities around the world stand with us in our time of sorrow and grieving. We really are connected with everyone.

This is my hometown.