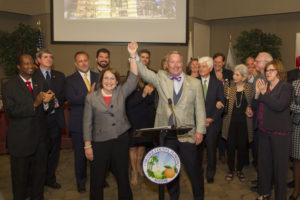 Mayor Teresa Jacobs of Orlando and Mayor Buddy Dyer of Orlando join the Orange County Board of County Commissioners and others city leaders to celebrate the approval of funding for construction of phase II of the Dr. Phillips Center for the Performing Arts.

A three-part measure will allocate $45 million of Tourist Development Tax (TDT) dollars to fund the phase II construction of the Dr. Phillips Center for the Performing Arts; to allocate $5 million to establish a consolidated sports bid fund under Visit Orlando; and to restructure the City of Orlando’s Communities Venues debt.

The approved allocation of funds is a way to take advantage of tourist-generated taxes and will not raise taxes or financially impact local residents. The TDT is a six-percent tax on short-term lodging, such as hotel rooms.

With the restructuring of the City of Orlando’s Communities Venues debt, TDT dollars were freed up to fund construction at the Dr. Phillips Center for the Performing Arts, and to create the consolidated sports bid fund. The establishment of a consolidated sports bid fund is intended to allow for a more effective sports promotion effort. The fund will be established with an initial amount of $5 million, with up to $2 million in replenishment funds each year after. The sports bid fund will also increase funding for marketing. Once finalized, an application process will allow for the possibility of future cultural and sports assets for the community and residents.

The $45 million in funding for Dr. Phillips Center for the Performing Arts will spur the construction of phase II of the Dr. Phillips Center. The new Steinmetz Hall will be the home of local performers, including the Orlando Philharmonic, the Orlando Ballet and Opera Orlando. Phase II will break ground in January 2017, with an expected grand opening in 2020.