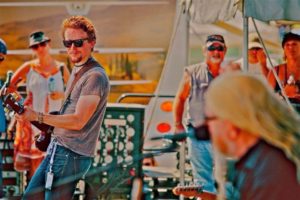 For some reason, I believe that podcasts are (to be very impolite) the “red-headed stepchildren” of the pop culture world. They don’t get enough attention although they deliver some fantastic information and entertainment, most of them introducing something new each and every week. I know I could not live as happily without the two that I listen to each week without fail. By the way, I am not going to write about those two, but since you insist, they are “Hang Up and Listen” (a sports-focused delight from Slate.com) and “Sound Opinions” (a weekly review of pop music from WBEZ Chicago). Rather than go on and on about their merits, I am going to spend this month introducing you to “Cocaine and Rhinestones,” a new podcast from Tyler Mahan Coe. As put by the podcast reviewers from theguardian.com, “Within this decadently titled podcast lies a brilliant encyclopedia of country music, which makes the genre accessible even if you’ve never set foot in a cowboy boot.”

If you know some country music history, you would know the famous father of Tyler Mahan Coe is none other than David Allan Coe. You may remember him from his heyday as one of country’s “bad boys” and by bad, I mean the several very bad haircuts (or rather the lack of a haircut) that he showcased in the 70s and 80s. (Cue the editors finding a special one to highlight). Hey, I kid because I care. Mr. Coe’s son has gifted us with a podcast that dives deep into the stories he heard on the road from his father and his father’s cohort. In just the first few episodes, Coe explains the context behind Nashville radio banning Loretta Lynn’s song “The Pill,” tackles the mystery of just what was thrown off the Tallahatchie Bridge in “Ode to Billy Joe,” and takes on all comers with his controversial explanation of the real intention behind Merle Haggard’s “Okie from Muskogee.”

“Cocaine and Rhinestones” is delivered very simply and directly by Mr. Coe, who apologizes endearingly each episode for his self-made-at-home-on-a-small-budget podcast. But I think the apologies are not necessary because he obviously loves his subject matter and has taken the time and made the effort to find “The Rest of the Story” for each subject, in the style of radio-legend Paul Harvey. Coe admitted to the New Yorker that “he records his vocals overnight, in a basement, when it’s quiet outside. ‘Just me alone in the dark, talking into a microphone.’” Well, I would like to thank him for doing so because the simplicity draws attention to the wonderful stories he breaks down. I’m happy to hear that, according to Rolling Stone, Coe is already hard at work on a second season and was recently granted permission to use the archives at the Country Music Hall of Fame for his research. It appears that I now have three podcasts that I will be listening to each week without fail.