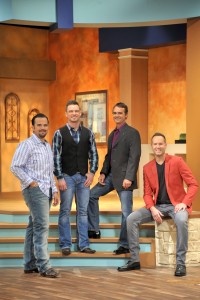 Dove Award-winning Difference Media recording artist Canton Junction is set to bring their “Get Your Praise On” tour to Winter Park’s Aloma Church (1815 SR 436) on Saturday, March 5 at 4:00 PM. They will be joined by special guests Karen Peck & New River.  Fans are also invited to a special “Meet & Eat” at 2:30 PM where they will have the opportunity to share a meal with the artists before the concert.

The concert is free, but donations will be accepted for Sanctuary of Hope, an outreach of Cornerstone Church in San Antonio, Texas, focusing on the building and development of an unwed mother’s facility; state-of-the-art orphanage; and world class boarding school.

“We love having the opportunity to share songs from Every Hallelujah on this tour,” said Canton Junction’s Matthew Hagee. “It’s a special treat for us to get to connect with so many at the “Meet & Eat” events before the shows.”

Since their debut in 2012, Canton Junction has quickly become one of southern gospel music’s most sought-after quartets. The self-titled Canton Junction featured the #1 singles “Hold On,” “The Son Shines Down On Me,” “Sweeter As The Days Go By” and “Dig A Little Deeper,” garnering a GMA Dove Award for Southern Gospel Album of the Year. In 2014 the group received the Singing News Fan Award for Favorite Southern Gospel New Traditional quartet.

Karen Peck and New River is a 4-time Grammy Award Nominated and 4-time GMA Dove Award Winning Southern Gospel Group. They have had over 15 number one hits. Karen’s flawless, delightful soprano voice has made its way into the hearts of Gospel Music lovers across the country and garnered an unprecedented 11 Favorite Soprano Fan Awards from the readers of The Singing News Magazine, Southern Gospel Music’s leading fan and trade publication. Karen, Susan, and Ricky have also received many awards from other magazine publications and Internet publications. In addition, latest album Pray Now was featured as the #1 song for October 2015 and garnered the Dove Award for Album of the Year. Their previous album, REVIVAL, has had two consecutive #1 songs with “Revival” and “Finish Well.” “Revival” won the 2014 GMA Dove Award for Southern Gospel Song of the Year, Song of the Year for the 2014 SGN Diamond Awards, Song of the Year and Progressive Song of the Year for the 2014 Absolutely Gospel Music Awards, and the album REVIVAL won Album of the Year for both the Diamond Awards and the Absolutely Gospel Music Awards. Their previous album release, Reach Out, had two consecutive #1 songs for “On the Banks of the Promised Land” and “Mighty Big God.”
For further information, visit differencemedia.org or turningpointpr.com.