Westminster Baldwin Park, an investment in the community of $45 million for the first phase, was designed by Fugleberg Koch of Winter Park and Bessolo Design Group. Walker Co. and Williams Co. are the construction managers. Construction is expected to begin in the coming weeks.

“We are so delighted to be breaking ground on Westminster Baldwin Park,” said the Westminster Winter Park executive director, Mike Haye. “I want to especially welcome our future residents. Your creative thinking and expectations will help us create an even more vibrant and active community here.” 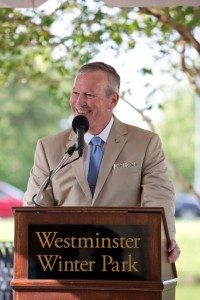 Mayor Buddy Dyer of Orlando, who helped turn the dirt to officially begin the project, welcomed current and new residents to Orlando. “Being a city for everyone means providing for our seniors as well… I’m proud to be celebrating this groundbreaking. To the new residents, I’m pleased to welcome you to the City Beautiful.”