The Expressionist Machinal Opens at the Annie Russell at Rollins College 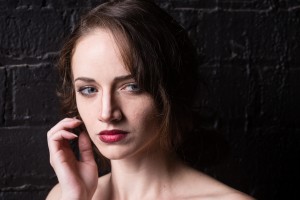 “Machinal” opens on February 13th and runs through the 21st

The Annie Russell Theatre continues its 82nd season with Machinal, based on the real life trial of murderess Ruth Snyder. The production, directed by Dr. David Charles, is a unique style for the Rollins Department of Theatre and Dance, and for the Central Florida area.

“Machinal was written by Sophie Treadwell, who was inspired by the sensational media coverage of the Snyder trial,” says Charles. “She explores the factors that may have led Snyder to kill her husband. In Treadwell’s dramatization, Snyder becomes a nameless ‘Young Woman’ living in the early part of the 20th century. She’s a cog in a machine, socially and politically, performing the function of Stenographer, Wife, and Mother.”

Charles’ production will honor Treadwell’s expressionistic style, presenting the world of the play through the lens of the Young Woman. “Her world and the players inside it are distorted and grotesque.”

“Although it was written in the 1920s, this play remains so relevant,” says Rachel Comeau, the junior theatre student playing the role of the Young Woman. “On first reading, my character seems lost and hopeless. But nobody wants to watch that! My challenge has been finding the light, joy, and strength that will allow people to connect with this story.”

Machinal opens on February 13th and runs through the 21st. Tickets are $25 for opening night, and include a champagne reception. All other performances are $20, with discounts available for students and seniors. More information on the Annie Russell Theatre’s upcoming production of Machinal may be found at www.rollins.edu/annierussell. For more information on the Department of Theatre and Dance at Rollins College, please visit www.rollins.edu/theatredance.