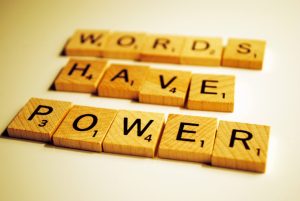 The Power Of Words

By the time you read this, it will have been almost three weeks since the Pulse shootings occurred in downtown Orlando.  I decided to write about this because of the serious and severe impact the event has had upon our community, and to also highlight the hopeful signs that have emerged and the need for those signs to be sustained.

There are truly no words to convey the horror, terror, and darkness heaped upon our region that night.  That event was a collision of extremist views, thoughts, and ultimately action.  In all likelihood it was initially rooted in the most simple and basic communication blocks used by human beings, words.

Words have power.  So often, the power of words are taken for granted or not respected.  The perpetrator of this act had been indoctrinated in such a fashion that words had evolved into philosophies of American intolerance, intolerance of diversity, intolerance of sexual orientation, and religious intolerance.  He used these prejudices to justify unjustifiable acts.

The political discourse and decorum in the United States has declined over the years.  The words used to describe our political opponents or those with differing views has fallen to its basest level.  The possibility of extreme elements using the “new mainstream” political language to advance their position may increase.

Extremism is easy to initiate because it is fueled by words. Extremism can destroy the social fabric of a community and ultimately a society.  As a community we must strive to ensure the rhetoric and intensity of discussions and perspectives do not devolve into immovable, unempathetic positions.

Extremism.  The gunman perpetrated the worst of the worst extremism, hate, and terrorism in one heartbreaking action.  The individuals at Pulse were targeted because they were members of the LGBTQ community, Hispanic, and ultimately because they were Americans. In either case, this is no reason to be subject to the horror and terror those individuals experienced.  It is said often that this was an attack on American ideals. It was.  It was an attack on ideals of individualism, freedom of expression, the melting pot of America, choice of lifestyle and others.

We must reject extremism and identity politics.  Please understand the power of words and negative attitudes and how they can escalate into tragic situations.  Be aware of your own intolerances and prejudices. We all have them.

We must strive to sustain the positives that have emerged from this situation.  The outpouring of love, light, kindness, and community strength tends to happen after these incidences.  However, based on anecdotal evidence, garnered from people who report on these events around the world, the response from our community seems to be much different than in other places with similar episodes.  I hope this is true.  I hope our region’s response truly defines and advances our community and is not just a moniker for T-shirts and bumper stickers.

We are all called upon to be stewards of our community.  That our actions and activities serve to move the community, society and ultimately the Country forward in a positive manner.  Words and attitudes are important in the execution and effectiveness of such stewardship.  Please remember, at the end of the day, it all starts with the power of words.  Use them wisely!

If you have questions, comments, or an area of financial interest you would like to see discussed in The Park Press please call John at 407-353-0594 or send email to FiscalFitness@ymail.com.  Follow John on Twitter, @john_gill1.