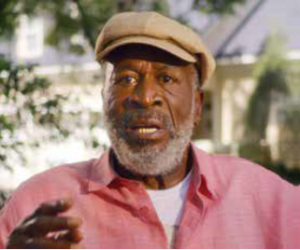 Because of Charley is one of 164 films representing 31 countries as part of the 30th Annual Film Festival taking place April 9-22, 2021 happening online and in Maitland and Winter Park.  Because of Charley, starring veteran actor John Amos (Good Times, Roots, Die Hard 2), was the first COVID-compliant film to be shot in Florida during the pandemic.

Set in 2004, Because of Charley tells the story of an estranged, racially mixed blended family who reluctantly gather at a Central Florida home for an anniversary party, fully intending to keep the visit brief — but Hurricane Charley takes an unexpected turn that changes everything. As the storm strengthens and the relatives are forced to huddle together in a cramped hallway, their bitter resentments and differences — race, age, faith, gender, sexual orientation — come to a boil.

“This was a movie that needed to be made!” declared Amos, who joined the Florida-based cast and crew after reprising his role of Cleo McDowell in Eddie Murphy’s Coming 2 America. “The role of Grandpa spoke to me,” he continued. “I felt that the character fit me like an old shoe. And the complex interplay between the ensemble players was compelling.” 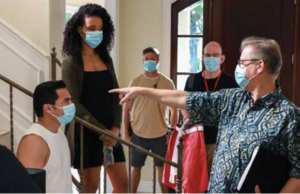 Jon Binkowski directs a
scene from the film “Because of
Charley.”

Principal photography was set for the month of September 2020 – the height of the pandemic and the peak of hurricane season. “It was a difficult decision to move forward, but worth taking the calculated risk,” said Executive Producer Lisa Enos Smith. “The cast and crew were thrilled to be working and participating in a film that is extremely relevant to what is happening in the world today.”

“We originally planned to produce an action comedy with beach scenes, car chases and stunt fighting,” explained director Jon Binkowski. “However, when we were faced with the ‘new normal,’ Lisa and I changed the direction of the film in a way that enabled us to shoot in a more controlled environment with a smaller cast on a faster timeline.” They shot their film in 21 days over four weeks in locations around Central Florida, including Celebration, Sherwood Forrest RV Resort (Kissimmee) and Oak Crest Mobile Park (Orlando).

Smith and Binkowski adopted the Screen Actors Guild- American Federation of Television and Radio Artists (SAG-AFTRA)’s strict COVID-19 Safety Guidelines, a detailed set of science-based protocols enabling employers to provide a safe workplace. The plan encompassed a daily routine including always having a certified COVID Compliance Officer on the set; requiring that all cast and crew members sign in, complete an on-line COVID questionnaire, have their temperatures checked, and wear disposable masks; and many more procedures. All surfaces were cleaned at the end of each shoot day, and key crew and cast members were tested for COVID-19 every other day.