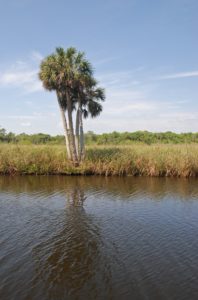 In The Garden – By Stephen and Kristin Pategas

In 1953, the Florida State legislature designated a state tree. They selected the native Sabal palmetto, commonly known as a sabal or cabbage palm or swamp cabbage. The 1970 legislature added to the stature of the sabal palm when it replaced the non-native coconut palm on the state seal. South Carolina designated the sabal palm as its state tree in 1939. While they are noble attempts to recognize a plant that most other U.S. states could not claim as their own, they missed the fact that a palm is typically not considered a tree. Among other missing attributes, it does not have growth rings and it cannot seal off areas of the trunk that are damaged.

The sabal palm is native to the Southeastern United States and parts of the Caribbean. It is found throughout Florida and grows in most soils including Myakka fine sand. This soil was designated as the state soil in 1989 since it is the single most extensive soil in the state including being found in pine flatwoods. Drive almost anywhere in the state and pass by extensive stands of pine trees. 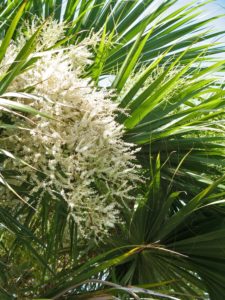 The sabal palm slowly reaches a height of about 65 feet and is drought and salt tolerant. Various parts of sabal palms were used extensively by native Americans to create roofs and supports for structures, for woven vessels, and for food. Hearts of palm harvested from the bud of the cabbage/sabal palm is readily available today. Unfortunately, removal of the bud kills the palm. Sabal palms flower as all other palms do and bees are attracted to the nectar produced by the flowers. Birds eat the black berries. Long before they were transplanted from the wild for landscaping, they were successfully used for the walls of forts since their spongy trunks absorbed the impact from cannonballs. On June 28, 1776, Charleston patriots made a fort of palmetto trunks and successfully defended it against the British in the Revolutionary War. South Carolina rightfully honored the sabal palm 163 years later.

While traveling around Florida look for other Florida state symbols native to Florida (year of designation noted): 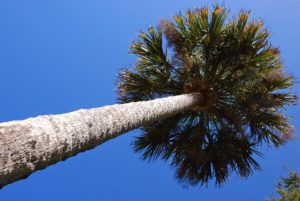 The sabal palm which can rise to a 65-foot height usually develops a smooth trunk as it ages.

It is a testimonial to the adaptability of the sabal palm that it will easily grow wherever you may find these symbols. 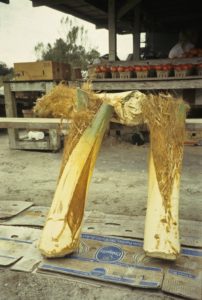 The bald cypress (Taxodium distichum) tree epitomizes Florida as well. If the legislature would like to correct its palm versus tree misunderstanding, they should make the bald cypress the state tree and properly select the sabal palm as – a state palm. If you are or know a state legislator feel free to contact us.

Hortus Oasis (FL26000315) in Winter Park is a boutique garden design company specializing in residential, commercial and specialty gardens. Stephen is a registered landscape architect and Kristin is a certified landscape designer. Contact them at 407-622-4886 / garden@hortusoasis.com