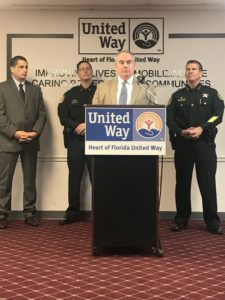 Heart of Florida United Way (HFUW) is furthering the fight against cybercrime in Orange, Osceola and Seminole counties. Last month, community leaders gathered with government officials, local and state law enforcement, and the Cybercrime Support Network to launch the new Cybercrime Victim Support Initiative. It allows residents to report instances of cybercrime and find resources to recover by calling, chatting or texting 2-1-1. HFUW is the first 2-1-1 call center in Florida – and the third in the nation – to launch a system to support cybercrime victims.

Cybercrime includes identity theft, financial fraud, cyberstalking, cyberbullying and other related crimes. Cybercrime, a pervasive, stealth crime that preys on vulnerable populations, often leaves victims struggling with few resources for economic or emotional recovery. In 2018 alone, more than 350,000 complaints from individuals and small businesses were filed with the FBI Internet Crime Complaint Center (IC3) for monetary losses of over $2.7 billion. Florida ranks among the top five states for financial losses, totaling more than $110 million. Unfortunately, experts estimate these figures represent only a small fraction of the cybercrime that actually occurs.

“Fighting for the well-being of Floridians is something Heart of Florida United Way has always been proud of,” said Jeff Hayward, HFUW president and CEO. “With the increased use of technology readily available at our fingertips, cybercrime can strike from any part of the globe at any time. Suffering from cybercrime without support is something no one should ever have to endure.”

With the support of funds from the U.S. Department of Justice, Office for Victims of Crime Transforming Victim Services grant, HFUW has partnered with the Cybercrime Support Network (CSN) and the Heart of West Michigan United Way to implement this multi-state approach to responding to the unmet needs of cybercrime victims. The program’s $1.4 million in federal funding was awarded in February 2019 and is set to continue for two years with future plans of expanding into additional counties. Since receiving the award, HFUW has worked to hire and train staff to handle cybercrime calls through 2-1-1 and is now ready.

The support of local law enforcement is vital to the success of the initiative. “Local law enforcement welcomes the Cybercrime Victim Support Initiative here in Central Florida,” said Sheriff John Mina of Orange County. “We are proud to be strengthening our relationship with Heart of Florida United Way by supporting this effort to protect and provide assistance to those that have fallen victim to cybercrime.”