An Inspiring Upside Down Backwards Story 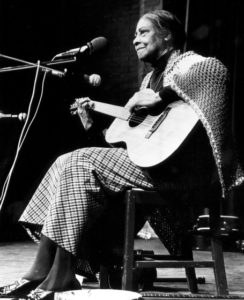 Let me to introduce you to a wonderful musician with a fascinating life story. Her name is Elizabeth (Libba) Cotten. Mrs. Cotten, who died in 1987 at age 95, lives on through her timeless music, in one lovely children’s book, “Libba: The Magnificent Musical Life of Elizabeth Cotten” by Laura Viers (a great musician in her own right), and in many fascinating You Tube videos of her performances.

Mrs. Cotten was born near Chapel Hill, NC, and wrote her signature song “Freight Train” when she was only 11 years old, long before she was “discovered” through a fortunate set of circumstances. How did this daughter of the Jim Crow south become an icon of the folk music revival of the 1960s?

Young Elizabeth began by secretly borrowing and playing her brother Claude’s banjo when he left each day for school. But, most unusually, since she was left-handed, she taught herself to play the right-handed instrument by turning it upside down and playing the bass with her fingers and the treble with her thumb, creating a unique picking style that was later termed “Cotten Picking.” She was hooked on music and often had to hide from her mother to play her new found “love.” In order to buy her own guitar, she saved her earnings from odd neighborhood jobs, eventually saving the $3.75 needed to purchase a Stella guitar from a local store.

Mrs. Cotten grew up, married, had a daughter, and put down the guitar for over 40 years. We would not have learned about Mrs. Cotten’s music without a chance encounter that happened in 1947 in Washington, DC. While working at a department store, Mrs. Cotten found and returned a very young and lost Peggy Seeger to her mother. A month later, she began work in the household of the famous folk-singing Seeger family. A few years passed before Peggy heard her “Libba” playing the family’s gut-stringed guitar, and shared her finding with the rest of the Seeger family. A folk music icon was discovered!

According to Smithsonian Magazine, “In the mid-1950s, a grown-up Peggy Seeger sang ‘Freight Train’ during a concert tour in England, and the song was soon recorded — without permission or credit — by a British singer. It became a hit in Britain, and the furor over the songwriting credit and royalties helped create a demand for Mrs. Cotten’s music.” Soon enough, in 1958, Elizabeth Cotten released her first album: “Negro Folksongs and Tunes,” which was recorded and produced by Peggy’s brother Mike Seeger. Her music career had finally begun. She spent the next several years touring folk festivals and made it “big time” in 1978 when she played New York City’s Carnegie Hall.

In 1983, the Smithsonian Institution named Mrs. Cotten a “living treasure” and in 1985, she received a Grammy for a live album. Late in her life, Mrs. Cotten moved to Syracuse, NY, which honored her by erecting a park and statue commemorating her memory. On that occasion, it was written that when Mrs. Cotten was once asked how the world should remember her, she said: “I want to tell them about my music. Tell them that I’m a good woman and tell them that’s where they will find me…right up the ladder (in heaven.)”