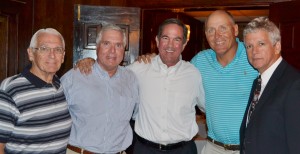 The 70s represented an era when Orange County was recognized as a hotbed of outstanding high school basketball talent, when intense rival games such as Winter Park versus Evans High would attract literally thousands of wildly passionate fans – fans who would sometimes break into riots at the mere mention that their rival was in some way better than them. It was a time when high school legends such as Stan Pietkiewicz, Darryl Dawkins, Jesse Cleveland, the Kuhl brothers, Dion Rainey, Calvin Lingelbach and Bo Clark provided a showcase of outstanding high school talent.

On Monday, April 20, four of the players from the legendary 1973 – 74 men’s basketball team at Winter Park High School – including Stan Pietkiewicz, Dave Shaw, Jay Colling and Dr. Joe Sterling – joined with Coach Bobby Marr to look back on that storied season. The guys laughed as they recollected how Stan was often reprimanded for practicing “too often” in the gym (to which he secretly had a key), reminiscing about nicknames and intense rivalries, and humbly deflecting attention and recognition to their teammates and coaches whenever it was pointed out that any one player was outstanding in that day and age.

“It was an honor to spend time interviewing these gentlemen – they picked up with one another as if they never left the court, and you could truly sense the passion for the sport and the respect for each other that was a huge contributing factor to the success of this legendary team,” said Williams, who hosts the weekly “Talkin’ Old School” radio program, featuring the “Old School Legends” series, on AM 540 WFLA / FM 102.5.

When asked about the differences between high school basketball today versus in the 70s, Coach Bobby Marr – who was a first-year coach during the ’73 – ’74 season, reflected, “These guys – no matter what their level of natural talent – worked very hard day in and day out to become better athletes, even off the court and in the off-season. There’s a saying that ‘teams are made during the season, and players are made in the off-season.’ That was very true of this team. These guys gave it their all and it paid off in accolades and success.”

Coach Larry Gergley – the famed Winter Park High School football coach – was also a coach at WPHS when these players were athletes at the school, and he recalled how there was a real sense of family amongst all sports at the school. “A big part of being an athlete at Winter Park is that you’re not just part of your individual sport’s family; you’re a part of the larger Winter Park Athletics family. I watched these guys grow and develop from the sidelines, and it is important to note that their success didn’t happen by chance. It came because of their hard work, and I enjoyed every moment of it.”