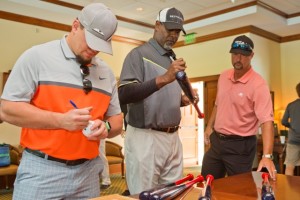 Once the final silent auction winner checked out on Monday evening, smiles were seen on the faces of all the Florida League staff and volunteers. After months of preparation and a busy weekend of activity, the 2015 Florida League Celebrity Golf Tournament had ended. Everyone knew that the tournament had gone off without a hitch, and it was hard not to be proud of all the work that had been put in to make the event a great success.

The Florida League is a summer wood bat baseball league for college athletes that is based out of Orlando. The League has teams in Altamonte Springs, DeLand, Leesburg, Sanford, Winter Garden and Winter Park. Players come from colleges all across the country to gain exposure in hopes of being drafted by a Major League Baseball team. To date, the Florida League has had an impressive record of success, with 324 players selected over twelve seasons. 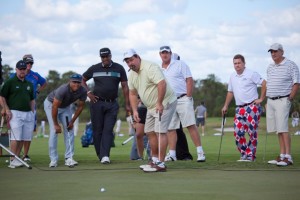 As a 501c3 non-profit organization, the Florida League relies heavily on sponsors, donors and fundraisers to provide the necessary budget to operate each summer. The Celebrity Golf Tournament brings in roughly 10% of that budget.

Not only does the tournament help raise money for the league, it also offers residents of Central Florida a rare opportunity to be involved with Major League Baseball players. More than thirty current and former MLB stars volunteered their time to be a part of the two-day event held at Interlachen Country Club in Winter Park.

San Francisco Giants All-Star outfielder Hunter Pence was an integral part of the tournament’s good fortune. Hunter, who has attended seven of the eight tournaments, started things off with an appearance on Golf Channel’s “Morning Drive” on Sunday. He then hosted a private hitting clinic for a select number of youth players, offering hitting tips, stories of making it to the big leagues and taking pictures and signing autographs for the kids. 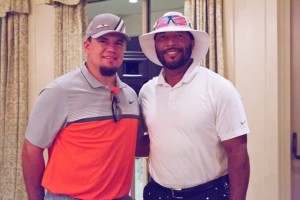 On Sunday evening, the Pairings Party commenced at Interlachen Country Club. All of the tournament golfers, as well as a select number of sponsors and local supporters, were joined by more than a dozen celebrities for a night of great food, drinks and an important message. League’s president, Rob Sitz; the tournament chair, Kevin Davidson; tournament sponsors Mike Zizmer and Newton Jones of UBS Private Wealth; and Pence all spoke on behalf of the league, stressing the importance of summer ball for players and the surrounding communities.

A number of unique items were sold via live auction, including a week-long stay at any Diamond Resort in the country, an autographed Reggie Jackson Yankees jersey, a case of fine wine, and jumbo canvas portraits of Jose Bautista, Hunter Pence, and Kyle Schwarber. In addition, more than $7,500 was raised through generous pledges from attendees for the “Feed the Players” campaign. The money raised from the campaign will go towards securing meals for players over the summer. 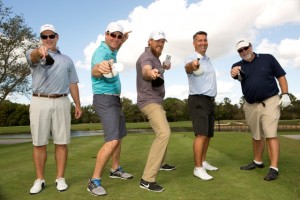 Monday morning was the main event at Interlachen. The highlight on the course was professional long-driver Bobby Bradley showing off his power stroke on Hole #10. With a donation of any amount, golf groups were able to use Bradley’s 380+ yard drive on a tough par five hole. A whopping $20,000 was raised on the long-drive hole, a new record for the tournament.

The weekend concluded with dinner, tournament prizes and a silent auction featuring more than 80 packages, ranging from vacations to dining certificates to autographed memorabilia. An impressive total of 93 different companies and individuals donated an item for the auction. This event would not be such a success without their generosity.