Many Central Floridians Can Qualify For Tax Credits 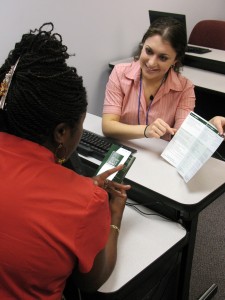 With tax season underway, here’s a little post-holiday relief for your wallet. Hundreds of thousands of Central Floridians will be eligible for credits of up to $6,143 on their federal returns through the Earned Income Tax Credit (EITC).

How does it work?

Approved by Congress in 1976, EITC allows those with low to moderate incomes to keep more of their earnings. The amount varies by income, among other factors, resulting in a refund when the credit exceeds taxes owed.

In Orange, Osceola and Seminole counties, more than $2.5 billion in credits have been claimed over the past seven years, including more than $570 million distributed in 2012. But still, the IRS estimates that one in four qualified taxpayers misses out.

“Many Central Floridians don’t realize they’re eligible, including those who might not have qualified before but do this year,” said Mark Batchelor, manager for financial stability initiatives at Heart of Florida United Way.  “We encourage residents to research EITC, because it’s free money just waiting to be claimed.”

Credited with being the No. 1 program for lifting families out of poverty, EITC helps recipients reduce debt, enroll in job training and cover fundamental needs.

“For those who are struggling to pay for basic expenses such as rent, utilities and groceries, additional money in their pocket could be life-changing,” said Robert H. (Bob) Brown, United Way president and CEO. “And since most EITC dollars are spent on goods and services right here in our community, local merchants and businesses also benefit.”

For the 2014 fiscal year, credits range from $496 to $6,143. Among other qualifying factors, recipients must have received wages at some point that year, with both earned income and adjusted gross income less than:

How to claim the credit

Central Floridians can receive 100 percent of their refund for free by filing electronically with a trained tax preparer at local VITA sites, some of which accept appointments. By setting up direct deposit with a bank account, credits are usually available in seven to 10 days.

While many will want to claim the credit as quickly as possible, they should be aware that non-VITA sites offering free tax services often include only Form 1040EZ – and charge extra for the forms needed to claim the EITC or other deductions. “If people can wait a few weeks for the VITA sites to open, they can potentially save hundreds of dollars,” Batchelor said.

Taxpayers do not have to be eligible for the EITC to utilize the free tax assistance at VITA sites. The VITA income limit to receive free tax help is $52,000.

Items to bring include:

If filing jointly, both spouses must be present. Some sites offer translation for Spanish, Creole and American Sign Language.

Those who wish to file for EITC on their own can visit www.myfreetaxes.com. The income limit to receive free tax help on the site is $60,000.

Visit www.hfuw.org or dial 2-1-1 for the location and hours of the nearest free VITA tax-prep site.