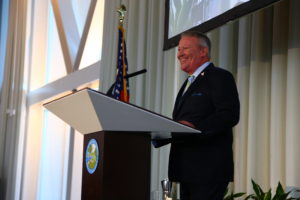 Last month, Mayor Buddy Dyer of Orlando took a unique spin on his annual State of the City speech, hosting it on his milestone 60th birthday and choosing to celebrate with an ode to the city with 60 reasons why it’s loved by so many.

Going with the ballad to “The City Beautiful” theme, the annual event kicked off with an original poem, written and delivered by Orlando’s new Poet Laureate, Susan Lilley, and was hosted in the City’s cultural crown jewel, the Dr. Phillips Center for the Performing Arts.

“If you’ll indulge me with a birthday wish, it’s that we spend our time together today celebrating our city,” said Dyer as he launched into his love list, including highlighting several new initiatives the city is leading in partnership with the community.

From neighborhood infrastructure improvement projects totaling more than $80 million, to dedicated funding for 15 new school resource officers in public schools, to the unique foodie scenes and fusions of culture in the Main Street districts, to a community that embraces equality and diversity with plans to install a first in Florida, multi-stall, all-user restroom in a government building, Dyer had plenty of notables to fill his letter of love to Orlando.

In addition to recent accomplishments, Dyer acknowledged there was more work to do while reaffirming his and the city’s commitment to working together with the community to keep Orlando on a successful path forward.

“Loving our city isn’t just about the fun stuff.  It’s about working together to solve problems,” said Dyer, adding, “That’s what we do best.”  Specifically, Mayor Dyer highlighted the progress the community has made to tackle homelessness and future plans to further those efforts.

More highlights of the 60 reasons to love Orlando, celebrated by Mayor Dyer in his speech, included:

Commitment to Providing Housing for Everyone