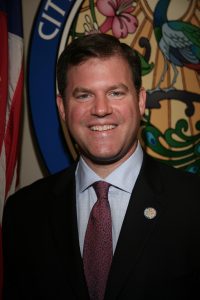 Over the years that I have been involved with Winter Park city government, people regularly ask about our elections.  Coming on the heels of the latest election, while the information and perhaps interest remains fresh, I thought it may be worthwhile to share some thoughts, facts, figures, etc.

Depending on the year and other factors, in addition to the mayor and/or city commission seat(s), voters may be provided the opportunity to vote on other items such as presidential candidates, charter amendments, or special ballot issues (e.g., library bond offering).  This most recent election, the only item offered to voters was the mayor’s seat.  I was honored to have received 71.99% of the votes (3,313 votes) allowing me to serve my second and final term, as mayor of the City of Winter Park.

Data from the past 60 years, 1958 through 2018, shows that we have an average voter turnout of approximately 36% in Winter Park. This percentage fluctuates through the decades from a low of 6% to a high of 79% depending what is on the ballot.  Not surprisingly, the highest voter turnout in the past 60 years with a 79% voter turnout was in 1980, the year Ronald Regan was elected as the 40th president of the United States.

More recently, below is a chart showing our voter turnout trend in the past 10 years. You’ll see peaks in 2008, 2012 and 2016 when all our municipal general elections were coupled with the presidential preference primaries.  In 2013, the drastic zero percentage was because both city commission Seats 3 and 4 were unopposed so there was not an election held that year.

During this past election Winter Park had a 21.13% turnout of registered voters, which is impressive given that there was only a single item on the ballot.  By comparison, Apopka which had three seats being aggressively contested by a total of 10 candidates, had a 20.70% participation for the mayor’s seat.  While we would like to have 100% participation, our voter turnout demonstrates a highly engaged constituency.

Thank you all for your engagement in Winter Park, this special place that we are privileged to call home.