Four years ago I introduced the “Mayor’s Founder’s Award,” to be presented annually during the State of the City Address.  This award honors an individual, family or organization whose commitment, dedication and actions have built upon our founders, Loring Chase and Oliver Chapman’s, vision and have developed Winter Park into the best place to live, work, and play for individuals and families of all ages. I wanted the awards to be as unique as the honoree, so I handcraft each year’s award to be reflective of the individual. This year’s honoree, Dr. Gregor Alexander, is a pillar in the greater central Florida community, touching literally thousands of individuals and families across decades of service.

For more than 42 years, Dr. Alexander, through his work at Orlando Health Winnie Palmer Hospital for Women & Babies has helped bring life to, and save lives in, our community. Under his leadership, and working alongside another great Central Floridian Mr. Arnold Palmer, the NICU grew from a six- bed unit in 1975 to a 142-bed unit in 2016 when it became the largest NICU under one roof in the country. The tiniest, most at-risk babies and mothers, found a miracle worker in Dr. Alexander and his team. Through his work with extraordinary neonatal professionals, Dr. Alexander has cared for more than 45,000 at-risk infants and their mothers.

The award I presented to Dr. Alexander, was made with the help of a mother and set of triplets who Dr. Alexander had a hand in delivering. It is in the shape of Lego blocks, which represent some of the earliest toys that young hands play with.  The colors of the award are also unique this year. As stacked they represent the flag of Columbia where Dr. Alexander was born and raised. When you separate the blocks, the colors of the pegs within are the colors of Mr. Palmer’s famous umbrella logo in tribute to the close partnership between Dr. Alexander and Mr. Palmer. The inscription inside reads:  “2020 Mayor’s Founder’s Award.  Dr. Gregor Alexander. With sincere appreciation for your lifetime building upon our founder’s vision, we thank you.” 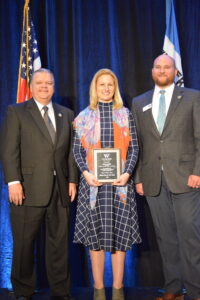 In addition to this award, we also present the city’s Employee of the Year awards in recognition of their extraordinary efforts during the year. I would like to congratulate each of these employees for their commitment to the City of Winter Park!

Allison McGillis is an extremely dedicated and hard-working member of the Planning & Community Development Department. She continually goes above and beyond the call of duty, working diligently on various city projects that require an extreme amount of knowledge and close attention to detail.

Allison’s expertise in Geographic Information System (GIS) mapping has allowed her department to complete many projects in a timelier manner. Her innovative work and public presentation skills helped her play a large role in the Orange Avenue Overlay District design. She was instrumental in bringing this vision to the public and City Commission. 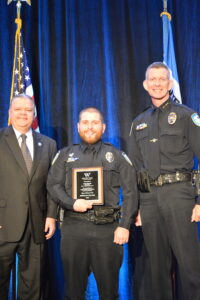 Firefighter/Paramedic Jacob Gercak has served the department since May 2018 and is one of only three paramedic preceptors, a member of the honor guard, and participates in many off-duty charitable runs and stair climbs. The pride and dedication Jacob displays has quickly earned him the respect of his peers.

In March 2019, Jacob went above and beyond while off-duty. He and another off-duty firefighter encountered a vehicle partially submerged in water that hit and snapped a power pole in half, bringing down live power lines. Jacob climbed onto the car, kicked in a window and found three young children struggling to keep their heads above water. With the help of other bystanders, they were removed and taken to safety. When Jacob returned to attend to the driver, he found their mother completely submerged. He was able to extricate her and perform CPR. His bravery and selflessness have earned him not only our Firefighter of the Year, but the department’s Award of Valor AND State of Florida Firefighter of the Year. 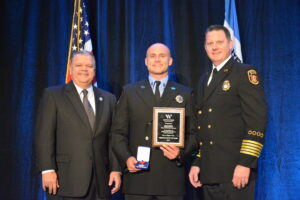 Officer Greg Gerardi has served the Winter Park Police Department for just over five years. He is currently assigned to the Patrol Division and was recently selected by his peers as the Top Cop for his unit. Officer Gerardi is dedicated to performing his job with excellence, setting the example for others to follow with an overall enthusiasm and positive attitude that are unmatched. He is a true team player who can always be counted on to assist whenever needed. In addition to making significant arrests, Officer Gerardi has received numerous commendations from citizens regarding the excellent service he provides. He is a great asset to the department and well-deserving of the Officer of the Year Award.

We are proud of these stellar individuals and all our city staff for their commitment to making every day exceptional in the City of Winter Park.