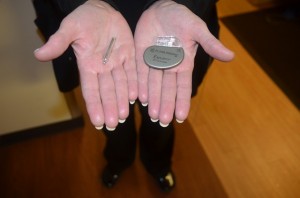 The tiny rod on the left is actually the entire Nanostim device that is implanted inside the heart. The larger device on the right is the traditional pacemaker that requires leads (wires) to connect it to the heart.

New pacemaker doesn’t require wires that go into the heart

About 4 million people worldwide have traditional pacemakers, those small box-like implantations in their chest with wires connected to the heart to make sure their heart beats in a proper rhythm.  But one man in Central Florida has a brand new pacemaker, that weighs 2 grams (the weight of 2 paperclips) and it sits directly inside his heart in a single chamber; no more box under the skin, no more wires to the heart.

It is a device called Nanotism manufactured by St. Jude Medical.  This new pacemaker is being tested in the United States as part of the LEADLESS II Clinical Trial.  Developed for patients with bradycardia – a heart rate that is too slow – the Nanostim device is designed to be placed directly in a patient’s heart without the visible lump, scar and insulated wires (called leads) required for conventional pacemakers.

The first implant procedure in Central Florida was performed by Drs. George Monir and Scott Pollak, electrophysiologists at Florida Hospital.

“The traditional pacemaker requires surgery and insertion of a wire called a lead into the heart,” said Dr. Pollak.  “Over time the leads can degrade and malfunction over a period of years.  The new technology is implanted through the groin and directly into the heart meaning there is a decreased risk of this device failing over time.” 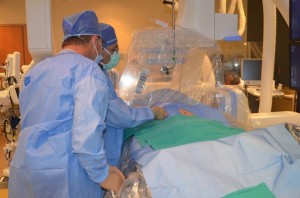 The Nanostim leadless pacemaker offers physicians at a less-invasive approach compared to traditional pacemaker procedures that require more extensive surgery. The miniaturized device is designed to be fully retrievable so that it can be readily repositioned during the implant procedure and later retrieved if necessary.

“This device is the future,” said Dr. Monir.  “This is the very beginning of this type of nanotechnology for the heart. I can imagine in the future there will be other devices that are even smaller, maybe even covering multiple chambers of the heart.”

James Lowe, 78, of Orlando had no doubts about being the first person in the community to have this new style of pacemaker.

“I’m a three time cancer survivor,” said Lowe.  “I think when you have the opportunity to be a part of something on the forefront of medicine, you go for it.  Plus with this device I’ll be able get back to playing golf and working on my ranch.”

To learn more about the LEADLESS II Clinic Trial and other cardiac trials at Florida Hospital, visit www.flheart.org.