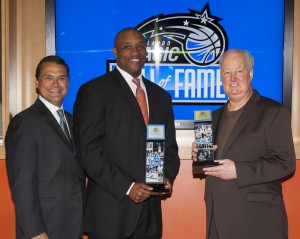 The Magic recently unveiled its inaugural Hall of Fame class naming the first two inductees, Magic co-founder and Senior Vice President Pat Williams and the team’s first-ever draft pick and current Community Ambassador Nick Anderson.  The Magic Hall of Fame will honor and celebrate the great players, coaches and executives who have had a major impact during the team’s illustrious 25-year history.

Williams, who has more than 50 years of professional sports experience to his credit, turned a dream into the Orlando Magic more than 25 years ago. Williams, along with Jimmy Hewitt, began the process of bringing an NBA team to Orlando in 1986.  On April 22, 1987, the NBA Board of Governors granted an expansion franchise to Orlando, and on December 22, 1988, the Magic sell their 10,000th season ticket, thus fulfilling their commitment to the NBA and the Magic was born.  In addition, Williams was honored with the John W. Bunn Lifetime Achievement Award in 2012 by the Naismith Memorial Basketball Hall of Fame. He currently serves as the team’s senior vice president.

“We are so thrilled to unveil to our fans our first two inductees into the Magic Hall of Fame,” said Magic CEO Alex Martins.  “Both Pat and Nick are Magic basketball, really laying the foundation for our franchise. They are the perfect pair to begin this great legacy of remembrance and recognition in the rich history of the Orlando Magic.”

The Hall of Fame will bridge the past with the future of Magic basketball, and the design will provide Magic fans an opportunity to enjoy the exhibits on game nights at the Amway Center. The exhibit is located in the Amway Center on the Terrace Level near Nutrilite Magic Fan Experience. The inductees will be determined based on their overall on and off the court contributions to the team and organization, years of service, impact in the community and general character of the individual.