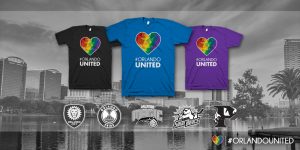 In a combined effort, the NBA’s Orlando Magic, MLS’s Orlando City, NWSL’s Orlando Pride, ECHL’s Orlando Solar Bears and AFL’s Orlando Predators are joining forces with the City of Orlando to show everyone that we are #OrlandoUnited.

The Magic, Lions and Pride, Solar Bears and Predators will be selling t-shirts emblazoned with the slogan “#OrlandoUnited.”  Net proceeds will be donated to the City of Orlando’s OneOrlando Fund – OneOrlando.org – to support those impacted by the June 12 terror attack.  The black, blue and purple t-shirts ($22 in adult sizes, $18 in youth sizes) will be available starting Thursday, June 16 at the Orlando Magic Team Shop at Amway Center, at a pop-up store at Wall Street Plaza (Thursday, June 16 and Friday, June 17), at the Orlando Solar Bears offices (2200 Lucien Way, Suite 400, Maitland, FL  32751) and their online shop (http://store.orlandosolarbearshockey.com) on Friday, June 17, at Camping World Stadium during the MLS game between Orlando City and San Jose on Saturday, June 18, and at Amway Center during the AFL game between the Predators and Tampa Bay on Friday, June 24.

“Our thoughts and prayers continue to go out to those personally affected by the loss of loved ones following this weekend’s tragedy of hate in Orlando,” said Orlando Magic CEO Alex Martins. “We are proud to join with our fellow professional sports teams to assist those impacted by this tragedy and we will continue to be in contact with the City of Orlando, Red Cross, and our partner agencies such as the Zebra Coalition to provide assistance in our community.”

The Orlando Magic committed $100,000 to the OneOrlando Fund on Monday.