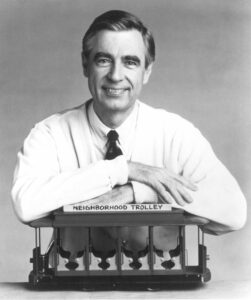 With the recent release of the movie “A Beautiful Day in the Neighborhood,” I’ve been reflecting a lot on what Fred McFeely Rogers meant to me in my life.  I was a regular viewer of “Mister Rogers’ Neighborhood” for at least three (around the ages of three to six) of the most important developmental years of my life.  Television programs for children of my generation were scarce, and our nation was dealing with some very dark times, so the news was always must-see TV in most households.  Bobby Kennedy was assassinated when I was three.  The Vietnam war was always a big topic. Protests against the war were shown quite often, and words like military draft, Watergate, impeachment, and president resigns were in common use daily.  Upon entering kindergarten, we started participating in this thing called a bomb drill.  An alarm would ring, and we’d go out in the hall and sit down with our arms over our heads and between our knees.  It was the times of the childhood of my generation.  And while my parents, like most parents, tried to keep the children from being stressed and worried about what was going on in the world, the kids were without answers.  That’s where the simplistic genius of Fred Rogers and his television show found its calling.  Mister Rogers used his talents to address real issues of our lives to children with a slow, gentle, and kind delivery.  He’d use puppets to address the tough questions and concerns that he felt children had, given our times.  He addressed our range of feelings and that it was ok to feel a certain way, happy or sad, and then he shared how to deal with those feelings.  He said he was proud me, and even sang it, and he hoped that I was proud of me too. I believe every one of his regular viewers felt that connection. And perhaps the most powerful message for me was him saying, “You are a very special person.  There is only one like you in the whole world.  There’s never been anyone exactly like you before, and there will never be again.  And people can like you exactly as you are.”

I’m proud to say I’m a Mister Rogers kid.  His legacy lives on with so many who enjoyed his show during such an impressionable time in our childhood.  I hope that this movie introduces the great life work of this 1951 Rollins College graduate to the youth of today.  Oh, and if you’ve never Googled “Fred Rogers testifies before the Senate,” do it.  It’s brilliant, and there will never be another Fred McFeely Rogers.