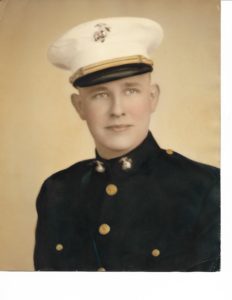 As we celebrate our nation’s 243rd year of independence, I’d like to take this opportunity to honor my dear friend and Winter Park neighbor for nearly 20 years, Lt. Col. Walter “Pat” Patton.  He passed away peacefully at the age of 97, surrounded by his family, on June 25.  The memories I shared with him have been top of mind.  Upon meeting Pat, I knew there was something special about him.  First, at 43 years my senior, he towered over me in height, and for a man in his 70s he was very active.  I quickly noticed he could fix anything, and if I needed a tool, he had it, and would eagerly let me borrow it, and always offered to help.  Shoot, he replumbed his home at the young age of 85!  If he was working on something, I’d try to time my stroll across the street, as to not impede on his progress, and during those water breaks I got a very humble man to share the amazing things about his life.

Born in Dadeville, Alabama, Pat was raised with humble beginnings.  While in the fifth and sixth grade, he was his school’s janitor, and he even sold tickets to Auburn football games.  It was the Great Depression, and at an early age he sought out work to help make ends meet for his family.  He graduated high school as the class valedictorian, and in 1943 graduated from Auburn University with a degree in chemical engineering.  And as our nation was dealing with the height of WWII, he joined the Marines.  I recall him saying, “They made me take a test,  evidently I did really well!  They sent me to radar engineering training at MIT, and then Harvard.” Radar was key on both sides during the war, and some credit our use of radar to why we and our allies won that war.

He served in the Pacific in WWII, and then with the China Marine Division where he was one of the last men out of China and earned a China Service Medal.  Then he attended Guided Missile Training at Fort Bliss and became a project officer at White Sands, setting three high altitude records.

After serving 23 years, he moved to Winter Park and became an engineer and manager at Martin Marietta.  His 22 years there expanded upon his military experiences and, as he said, “I was able to continue doing things with rockets and missiles that were well-thought-out but had never been done before.”

I’m so honored that, as luck would have it, he was my neighbor and then became an amazing mentor and friend.  That my children, who affectionally called him “Mr. Pat,” got to grow up knowing this amazing and humble man.  He is survived by his wife Hattie “Miss Bunny” Patton, his two children- John Patton and Mary Dugan- and many grandchildren and great-grandchildren.

He was a man of integrity, who was dedicated to his country, family, and church.  As written in the end of A Hero’s Welcome – “So take your place of honor among those who have gone before and know you will be remembered for now and evermore.”