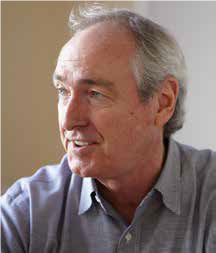 Rollins College will host 2015 National Book Awards finalists Ross Gay and Sy Montgomery on February 25 as part of the 2016 Winter With the Writers literary festival.

Gay’s Catalog of Unabashed Gratitude was a finalist for the 2015 National Book Award for poetry. Montgomery’s The Soul of an Octopus was one of five finalists in the awards’ nonfiction category.

“Ross Gay will bring enormous energy and a poetics that includes a willingness to both ‘terrify and comfort’ his readers, as John Berryman once said,” says Carol Frost, the Theodore Bruce and Barbara Lawrence Alfond Professor of English and director of Winter With the Writers. “His poetry labors to show us ways away from ordinary cruelties and toward transcendent grace.”

“In Sy Montgomery, students and the broader Rollins community can expect a naturalist’s view of the world. The Soul of an Octopus recounts her experiences, some quite funny, with this astonishing sea creature and tells us about the connections we have with all the wild creatures of the natural world.”

Gay and Montgomery join Antonio Skármeta, Phillip Deaver, and Chase Twichell in the 2016 Winter With the Writers season.

Chilean novelist, screenwriter, and diplomat Antonio Skármeta is the author of Ardiente paciencia, which was adapted for the screen twice, including the 1994 Academy Award-winning film, Il Postino (The Postman).

6:15 p.m.:        Screening of No (based on Skármeta’s play, The Referendum) with author introduction and post-screening Q&A – Enzian Theater

*Tickets are free and can be obtained in the English Department office on the first floor of Carnegie Hall at Rollins College. Contact Jessica Love in the English department for more information.

Deaver is a professor of English at Rollins and author of the soon-to-be-released Forty Martyrs, which follows the intertwining lives of a psychologist, his wife, his lover, his lover’s husband, and his lover’s own paramour in the small town of Tuscola, Illinois.

*Guest writer Brian Turner will teach the class. Turner is the author of Here, Bullet (poetry) and My Life as a Foreign Country, “a war memoir of unusual literary beauty and power.”

*Jill Jones, Ryan Rivas, Brian Turner, and Ryan Favata will read portions from Forty Martyrs and answer questions from the audience. Deaver will sign copies of the new novel.

Twichell is the author of seven books of poetry, most recently Horses Where the Answers Should Have Been: New and Selected Poems. She will serve as the Irving Bacheller Professor of Creative Writing at Rollins for the 2015-2016 academic year.

Gay is the author of three poetry collections, including Against Which, Bringing the Shovel Down, and Catalog of Unabashed Gratitude, which was a finalist for the 2015 National Book Award for poetry.

Montgomery is the author of 20 books of nonfiction for adults and children, including the New York Times best seller The Good Good Pig. Her latest work, The Soul of an Octopus, was a finalist for the 2015 National Book Award for nonfiction.