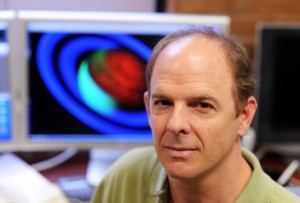 The launch is scheduled for 2:16 a.m. from Cape Canaveral Air Force Station and will deliver cargo and crew supplies to the International Space Station. Several experiments on the flight will include:

Colwell’s experiment in a six-inch-square box will look at slow-speed collisions of dust, which aren’t possible to create in Earth’s gravity. The results of the low-energy collisions will be used to help understand the processes in action in the protoplanetary disk, the disk of dust and gas that surrounds the center of our solar system. The test will lay the groundwork for experimenting with larger particles.

Colwell, who is also assistant director of the Florida Space Institute, studies the origin of the solar system, including the early stages of planets, Saturn’s rings, and the evolution of comets and asteroids.

His experiment was chosen two year ago. The project is sponsored by Space Florida, which is Florida’s spaceport authority and aerospace development organization, and NanoRacks, a private company that operates the first commercial laboratory in low-earth orbit. Colwell, the primary investigator on the project, will be out of town and won’t be able to witness the launch, but members of his team –Addie Dove, Julie Brisset and some students – will be on hand when the experiment lifts off.

Dunn’s experimental 3-D printer in space would cut down on resupply missions and would be the first time something is manufactured off the planet, which is a necessary step toward multi-planetary colonization.

The printer could make replacement parts and other items needed, reducing the need for hauling expensive parts and materials aboard spacecraft.

The aerospace engineer (’07, ‘09) interned at Kennedy Space Center and co-founded the company Made in Space, which is now based in NASA Ames Research Park at Moffett Field, Calif.

Both experiments were selected as part of NASA’s Flight Opportunities Program.