Two Strong Voices To Help Us Through The Summer 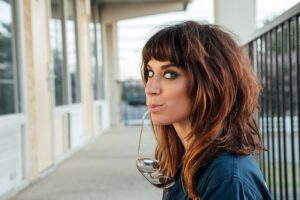 I feel like I am repeating myself by presenting to you another set of strong, independent voices in the world of music for you to consider this month. I promise that they are different from last month. They include a possible album of the year, this time from one of the biggest stars on the planet. The other is well down the list of recognition and awards from this superstar but should be considered equally as important when choosing something to “dive” into this summer. First, to the superstar!

It is a little surprising that we haven’t had an album of new music by Lady Gaga since 2016’s “Joanne.”  At that time, I sheepishly admitted my appreciation for that departure from Gaga’s dance floor bombast, as “Joanne” was delicate, intricate, and guitar-based. Well, on her latest, “Chromatica,” Gaga is back to both the bombast, the electronics, and the dance floor with a vengeance! No, that’s not the right word, she is back with an homage to her first influences and has made an album head to toe with what the kids would call “bangers.” Each song is the perfect length for radio, which means if there isn’t an extended remix of these songs somewhere in our future, I’d be flabbergasted. If you are looking for something to get your mind and feet going – this is the album for you and is likely to dominate the summer. But don’t just believe me, read the great music writer Carl Wilson’s take in his Slate article, “Every Song on Lady Gaga’s Chromatica in Comparison to A Star is Born’s Butt Song.”

Our next selection comes from way down south by Muscle Shoals, Alabama way. As you may already know, Muscle Shoals has birthed some classic sounds over the years, including the number one hits “Brown Sugar” from the Rolling Stones, “I’ll Take You There” from the Staple Singers, and “When a Man Loves a Woman” by Percy Sledge (who was working as a hospital orderly when he recorded the song that changed his life in FAME Studios). Artists who recorded at Muscle Shoals Sound Studio included The Rolling Stones, Aretha Franklin, George Michael, Wilson Pickett, Willie Nelson, Lynyrd Skynyrd, Paul Simon, and Bob Seger. Nicole Atkins has also recorded there, including parts of her latest album, “Italian Ice.” Ms. Atkins has a voice that rivals anyone you could name and has lent it to some of my favorite recordings over the past few years: a great cover of Springsteen’s “Dancin’ in the Dark” and the song “Faded” with the band Cotton Mather to name just two. Her latest album showcases her amazing voice, from the first song “AM Gold” through collaborations with Spoon’s Britt Daniel and Avett Brothers’ Seth Avett and others. The duet with Daniel, “Captain,” sounds like it came from Out of the Blue-era ELO and on the collaboration with Avett, “Never Going Home Again,” she channels a fiery Bobbie Gentry. Look for the making of “Italian Ice” video on YouTube for more on this great release. https://www.youtube.com/watch?v=uo_qyjjzt6Q

I think it is time you broke out the good speakers and crank these two albums to eleven this month.