In recognition of UCF Football’s perfect season and national championship, the City of Orlando, the Downtown Development Board and the University of Central Florida will host a FREE block party on Church Street. This family-friendly event will begin at 6 p.m. and include a pep rally, National Championship recognition, and much more. 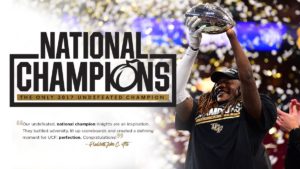 UCF Athletics Director Danny White added, “As Orlando’s Hometown Team, we’re looking forward to celebrating with our community on Monday night. Thanks to the City of Orlando and Mayor Dyer for helping make this national championship celebration special for our student-athletes and fans.”

PARKING AND TRANSPORTATION:
For information on where to park in downtown Orlando, go to cityoforlando.net/parking. The City of Orlando encourages fans to use alternative forms of transportation including SunRail and LYMMO.