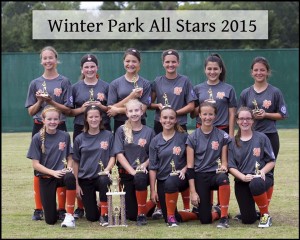 Thirteen girls, four coaches, and a caravan of family and friends went on quite a wild ride this summer, when the 14U Winter Park girls softball team made a respectable run for the gold at the 2015 Babe Ruth Softball World Series!

The Winter Park Wildcats took down teams from South Orlando and East Orange at the district tournament that was hosted on their home fields in Winter Park.  The win at Districts secured a spot for them at the state tournament in Newberry, Florida where they battled back from the loser’s bracket on turf fields and in the blazing sun to fall just short of the championship in a tough loss to Gainesville. 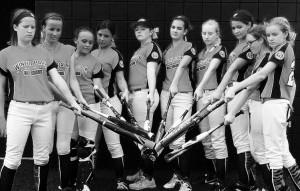 However, their performance secured a spot for them at regionals which took place just a few weeks later and back to Gator country they went, with Alachua hosting.  Unfortunately, the heat took its toll and the team was unable to rally against Ocala, falling just short of the championship game and finishing third to Gainesville and Ocala.

Eager for another chance to compete, the team went home to Winter Park, adjusted their practice schedule, and set their sights on the World Series which was back in Newberry on the turf fields they had sampled in the state tournament earlier in the season.  It took five long rain delay-filled days of play, but in the end our home town girls battled their way to the semi-finals.  Sadly, they faced Jefferson Parrish, Louisiana -who came to the competition favored to win- in the semi-final game and fell to the stronger team 6-1.   The powerhouse team from Louisiana went on to play Gainesville for the championship and the final finish was Jefferson Parish first, Gainesville second, and Winter Park third, which is the best finish for any Winter Park All Star team ever IN THE WORLD SERIES!  Well done and go Wildcats!!