Winter Park Odyssey Of The Mind 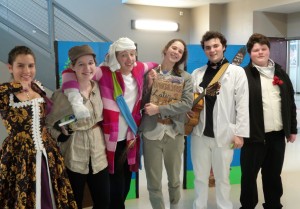 The Winter Park world finalist Odyssey of the Mind team has enthusiastically returned for the 2016 competition season. This close-knit group of creative students is enjoying a milestone season before team captain and coach, Will Hornbeck, heads off to college next fall.

The team began at Glenridge Middle in 2010 and has competed every year in the Magic Center Region. Years of hard work paid off last year, resulting in a sixth-place finish (with honorable mention) at the 2015 World Finals in Michigan last May.

Teammates are currently working toward a repeat victory this year, aiming for the 2016 World Finals in Iowa. They are off to a winning start, placing first in all three categories (long term, spontaneous and style) at the Regional competition held on February 27.  February scores were a team best and exemplify how far the problem-solving skills have come since the team’s formation in seventh grade. The next stop is Florida State Competition at UCF on April 9, 2016. 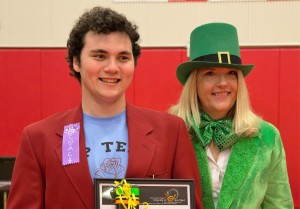 Anna Long, director of the Magic Center Region, awards Will Hornbeck one of two regional Senior Scholarships presented on February 27 at Edgewater High.

The team was pleased to see two new teams from Glenridge compete this year at the Regional competition, as well. Many of the younger students sat in audience of Team #32540’s first place long-term show at Edgewater High. The veteran students, now all in high school, are thrilled that their legacy of creative problem solving is being met with enthusiastic and promising new students in our local school district.