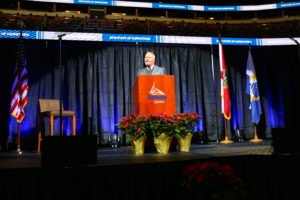 Last month Mayor Buddy Dyer of Orlando delivered his annual State of Downtown address at the Amway Center highlighting the community’s work together over the past 16 years to revitalize Parramore and fuel downtown Orlando’s resurgence through investments in education.

To help tell this story, Mayor Dyer included two young adults, Raysean Brown and Julian Harris, who grew up in Parramore and neighboring Pine Hills, and who are now working together with the city of Orlando to help shape the future of Parramore’s youth and downtown Orlando. “Raysean and Julian’s stories are living proof that education can change lives, change neighborhoods, change entire downtowns and cities,” said Mayor Dyer.

Highlighting the new UCF and Valencia College campus under construction in Creative Village, Mayor Dyer noted, “This is an urban campus that has been built with, and for, the residents of Parramore and our entire city.”

From UCF offering 20 of the most-sought after undergraduate degrees, to Valencia’s world-class culinary and hospitality school and Center for Accelerated Training, to FAMU law school, the ACE community school in Parramore and the city’s Parramore Kidz Zone and after-school programs, Mayor Dyer noted these pathways to education are the very definition of opportunity.

“Whether you have eight weeks to make your life better, or you want to spend eight years getting your undergraduate and law degrees, or something in between, all of this is now possible in the same village in Downtown Orlando,” said Mayor Dyer.  “And this all adds up to a new kind of commitment to anyone in our community who wants to leverage education to make their lives better.”

A Place to Grow, Learn and Thrive

A Place Where People Want to and Can Live

Watch Raysean Brown and Julian Harris talk about the impact of education on their lives and the young people in Parramore at – youtu.be/T4-DCWcaRPA.